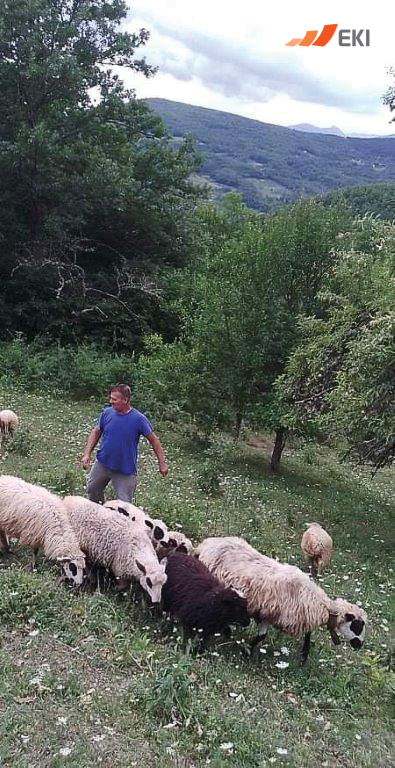 Mr. Ago Boganić from Goražde has been engaged in agriculture business for 15 years now. Following the 1990s, he was unemployed and life was hard for majority of population, so Mr. Ago decided to start this business, as he grew up in the family that worked in agriculture, so he knew what he was getting himself into.

His primary lines of business are raising sheep and laying hens, and the household also has two cows, for which Mr. Ago’s wife is in charge. In the beginning, they had a maximum of a dozen sheep, which was not enough to live on, so Mr. Boganić also worked at construction sites for a daily wage.

Today, the situation is significantly better, the livestock numbers over 60 sheep and 50 laying hens. Mr. Ago’s aspiration is to constantly increase the number of sheep, because he has income from this activity throughout the year (he sells lamb meat and also lamb for religious sacrifices, and he also dries meat, which he also sells). Considering that he has been in this business for a long time, he has gained regular customers and has no problem with placement, on the contrary, he could achieve a higher sales volume if he increased production.

His wife helps him in his work and with their work they can provide a normal life for their family.

The beginnings were difficult because they did not have the funds to start the business, and they turned to EKI for a loan, which significantly helped them to start the realization of their idea and start breeding sheep and laying hens. The most important thing on that path was a strong desire, patience and will to succeed.

Taught by his own experience, Mr. Ago tells everyone who wants to start the same or related business activity, not to give up on the first hurdle, to have a strong will for the job they are doing and not to be afraid of manual labor, because as he says, agriculture requires physical effort, but because of that, the psychological relief is much greater than when you work for someone, and the income is quite enough for a decent family life.